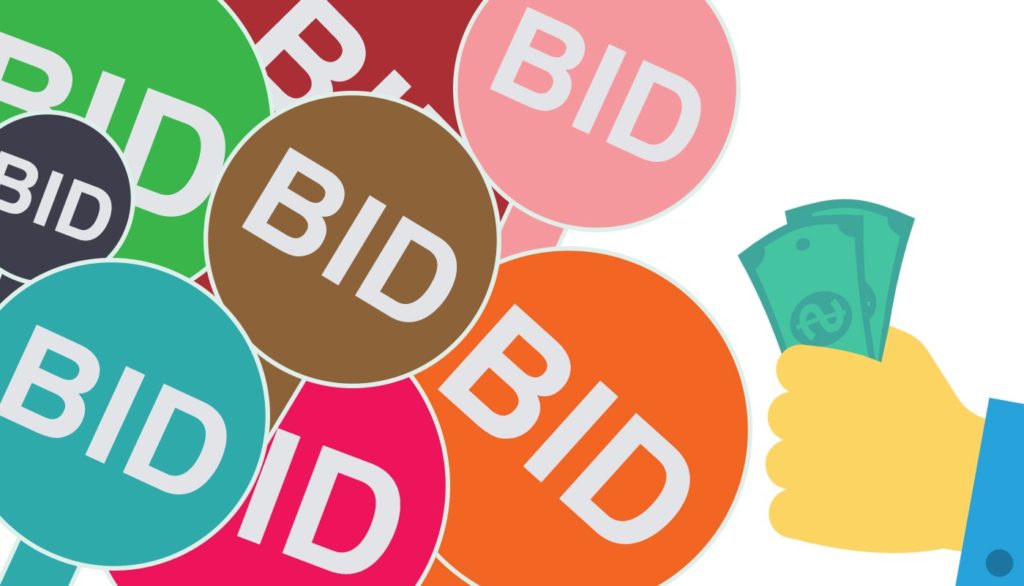 It’s one of the more controversial aspects of online casting platforms: Bidding.

Many industry professionals believe that talent bidding against each other drives rates down, and surely in some cases it does. It would be nice to say, “I won’t work on a job that requires a bid,” but taking such a stand means losing out on a lot of potentially high-quality work, and ignores the fact that almost every other freelance industry has moved to a model where contractors bid against each other for jobs.

I’m not here to pass judgement on whether it is a good thing or a bad thing, but ignoring economic realities and buyer preferences has helped lead us to a world where corporations working against our interests are trying to control more and more of the marketplace. Even the good sites acting strictly as matchmakers, (Voice123, Bodalgo,) allow clients to post jobs with a budget range or a budget to be defined.

It’s up to us to submit a professional bid, and hopefully, this article will help you maximize your earnings.

With this in mind, let’s look at three common types of buyer on online casting platforms, and some scenarios that might help you submit a bid that will win the job. Surprisingly, this doesn’t mean going low in most cases.

Please note that the following scenarios assume the usage and length of content is fair for the range provided.

Let’s face it, while some buyers falsely cry poor, many are producing low-impression-count jobs that don’t justify a high budget for voiceover. I always think of the hypothetical example of Joe’s Pizza in Piscataway, New Jersey. Joe’s got a store in Jersey, and maybe one in Connecticut too. Joe has posted his local radio commercial job on an online site himself, not through a production company or ad agency. You’re dealing directly with Joe. The spot will run for 13 weeks, and Joe’s total cost between production, ad buy, etc…. is about $15,000. Maybe less. Joe thinks $500 sounds like a lot to spend on a voiceover for something with his total budget, and he’s probably right, though he’s open to going that high for a voice he falls in love with. Ultimately, though, Joe would be comfortable around $300, which is 2% of the total production cost.

Now, think about this: How much does McDonald’s spend on an average commercial, start to finish including ad buy? A million dollars? Two? If you were getting 2% of that pie you would probably be pretty happy, right? 2% of Joe’s overall spend isn’t a lot of money, but it’s probably fair for a limited run in local markets. Joe’s looking for a $300 bid, and you might consider accommodating him here.

Signs of a Budget-Minded Buyer:

*Posts the job directly, not through a production company or ad agency.

*Posts as an individual; Joe Smith versus Medical Holdings, Inc.

*Language and direction in the post are colloquial, not corporate-sounding.

*Seems to have limited knowledge of industry terminology, and how things work.

Advice: Use your judgement, and don’t compromise your standards. Some Budget-Minded Buyers may be too budget-minded to justify a bid in the first place. That said, assuming the entirety of the range is fair for the work posted, this is one case where bidding on the lower end of the range is likely to yield better results, though you should still avoid going to the low number or below, as even a Budget-Minded Buyer is prone to being turned off by what looks like desperation.

Where would I bid?

$350 for a 13-week run. Maybe some reasonable accommodations for re-buys.

Probably 50% of jobs on online casting sites are posted by production companies, and sometimes ad agencies. You can often recognize them by use of an adjective followed by an animal as their company name: Glittery Dinosaur, Impetuous Monkey, Jazzy Gopher, and so on. Okay, sometimes the names are more conventional, but I digress.

Production companies come in all shapes and sizes, but let’s assume this one is your garden-variety, middle-of-the-road production house in a big city, posting a job for a web ad for a medium-sized regional brand to be used for one year.

Our Garden-Variety Production Company is on a fairly defined budget that is part of the overall bid they submitted, (yes, production houses often have to submit bids, too,) to the end client. They have allocated up to $1,000 for voiceover, but aren’t telling you that. They’d love to find Johnny Goldenthroat or Jill Perfectpipes for five hundred bucks, but having sifted through the mounds of garbage auditions online a few times before, they understand that the 10-20% of talent who are usually competitive tend to charge a little more, (though they’ve gotten lucky once or twice.)

So, they’ve set their budget between $500-$800, figuring they will end up at the high end of that range, and hoping their ideal voice doesn’t come in over their number, though reserving a little cushion in case he or she does.

Now, in my personal experience casting from online sites, most jobs come down to about five talent who really fit the spec well and have executed a competitive audition. Production companies are like Macy’s buyers. They like the big brand names, but probably aren’t going to spring for a Ralph Lauren suit unless it is on sale.

At the same time, if they see something in the discount underwear bin, even if it’s Victoria’s Secret, they are likely to pass. If they have five decent reads to choose from, the person bidding $500 and the person bidding $1200 are both probably out.

This scenario is the paradigm for the classic online casting bidding advice of aiming for the high end of the middle.

Signs of a Garden-Variety Production Company:

*The word “Productions” in the name of the client.

*The word “Agency” in the name of the client, (this likely means ad agency, not talent agent, who don’t generally put their jobs online.)

*Another company name with a ‘creative’ feel.

In the final scenario, we find the Holy Grail of online casting clients: The Deep-Pocketed Corporation who has posted their job directly to an online site. These companies are my bread and butter online, and probably comprise about 30% of the work available on these platforms.

The Deep-Pocketed Corporation typically posts their job directly because they realized they needed a voiceover for their internal presentation, training video, lengthy e-Learning project, or B2B sales video, and somebody in the responsible department said, “Well, there’s gotta be a site for that, right?” Let’s hope they chose the right one, but regardless Linda in HR or whomever may be casting still thinks of VO as glamorous, TV, radio, HOLLYWOOD!

This is a Fortune-500 company, or close, and all they care about is getting the best voice. They have a budget in mind, but it is the back end of a six figure appropriation for the project, and they aren’t married to it….in fact, the large range indicates that they don’t really know what this stuff costs. Oh, and they need it yesterday.

The individual responsible for choosing the voice for this Deep-Pocketed Corporation is often a senior manager or junior executive…sometimes even higher on the food chain. They are quality-minded in everything they do; The kind of person who sees a Gucci bag that they kind of like, hears the price, and then wants it even more because it seems so EXCLUSIVE. And, oh yeah, how cool is it that they get to play Simon Cowell for an hour and choose who gets to the final show!

My friends…..these are the clients you want.

Signs of a Deep-Pocketed Corporation:

*Company name is something serious and sophisticated.

*If it’s an individual, their name is followed by a title, or letters of academic qualification.

*On certain sites the company name has been hidden by request.

*Very precise in delineation of terms for submission and payment.

As you can see from these examples, bidding doesn’t have to mean lowballing. Most clients will respect a confident bidder more than a passive one, and a lot more than a desperate one.

As a buyer, I’ve personally passed on talent who were competitive when their bids were suspiciously low….thinking, “What am I missing?”

I wish we lived in a world where every client had a set budget and this didn’t require so much thinking, but until we do, polish up your poker game, understand who else is at the table, and play your cards well. You might just end up with a big stack of chips!