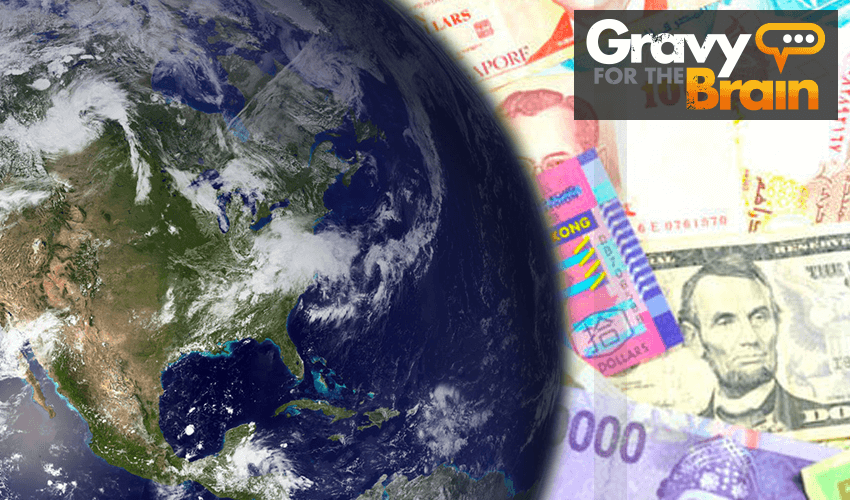 What is the future of voiceover rates? That’s a very big question. It is in fact, the biggest question of our time. This blog post tackles that very subject and also what Gravy For The Brain is doing about it. We have exciting news…..and have potentially solved many of the industry rates issues.

The GFTB Rate Guide V2 is now live, and comes with many new concepts and new features.

But before we look at the V2 voiceover rate guide, let’s look at what the actual problems of the industry are regarding voiceover rates.

1. What are the Problems with Voiceover Rates in the Industry?

Over the last half decade we have seen global voiceover rates spiral downwards in what has become known as the ‘race to the bottom’. This has become a circular problem and in the main has been caused directly or indirectly by the advent of the Pay To Play (or subscription) sites, like Voices.com, Voice123, bodalgo, Mandy and so on.

(For a full list of all P2P sites, check out our very own V.O.I.D. – the Voiceover Internet Database which lists all voiceover companies, globally)

The main reasons that the P2P sites have caused this issue with voiceover rates and their degradation, are as follows:

With that all said, we can’t blame the P2P sites for everything! While they are a key component in the reasons for degradation of current voiceover rates, there are other factors at play:

….and thus, we have seen ever-decreasing rates of pay for voice jobs, globally.

It’s quite clear to most seasoned voiceover artists and industry professionals, that the race to the bottom on voiceover rates is simply not sustainable.

To a certain extent, yes, all markets fluctuate, ebb and flow, and change according to supply and demand. The issue here is not that…. the issue is that hirers, and to some extent, new voices, don’t know about or respect the fact that the voiceover industry is 100% B2B, or business-to-business as a model. We don’t sell to individual people, we sell our services to businesses.

The realisation that brings is that we as voiceover artists are businesses. Whether we are a sole-trader or an incorporated company, we are solo entrepreneur, individualised businesses.

Here then is a list of what you have to pay in the day-to-day ongoing life as a business:

….and all that is before you pay….the salary.

The problem is the same as the one faced by musicians, artists and actors the world over – hirers and inexperienced voice artists do not think about the costs of running a business, they simply see the end-product – they simply see £250 or $300 per hour as a ludicrous and extravagant fee. After all, it’s only the voice, right???

The fact is that to run a successful business, you have to run it like successful businesses do, and that means charging accordingly to cover the costs of production and make a profit. Consider the list of outgoings and then consider working all your jobs for 50 bucks a time – you just can’t feed your family that way….and this is why voiceover rates have existed the way they have been for decades before now.

3. What is Gravy For The Brain doing about it?

Most people know that Gravy For The Brain and GVAA already have rate guides, which are indicative of the average prices charged by most voiceover artists today. These guides have been instrumental in keeping the voiceover rates in the industry as stable as possible. But the fact is that although they were a good start, they haven’t been good enough, and for a few good reasons.

The original voiceover rates guides were a brilliant start, but it’s time to move them forward, to enable true education and help further education of everyone who needs to be educated – from hirers to voices.

A) Problem 1 – Accessibility of Rates – Solved!

Up until this point the voiceover rates guide was flat HTML, i.e., all in one flat page. This made very difficult reading and wasn’t at all user friendly.

Solution: The GFTB Rate Guide V2 has databased all the rates, and these are now searchable by Category and Genre. For example, you can search Television and then Narration, and hey presto! You’re given your rate with it’s notes and usage indications. 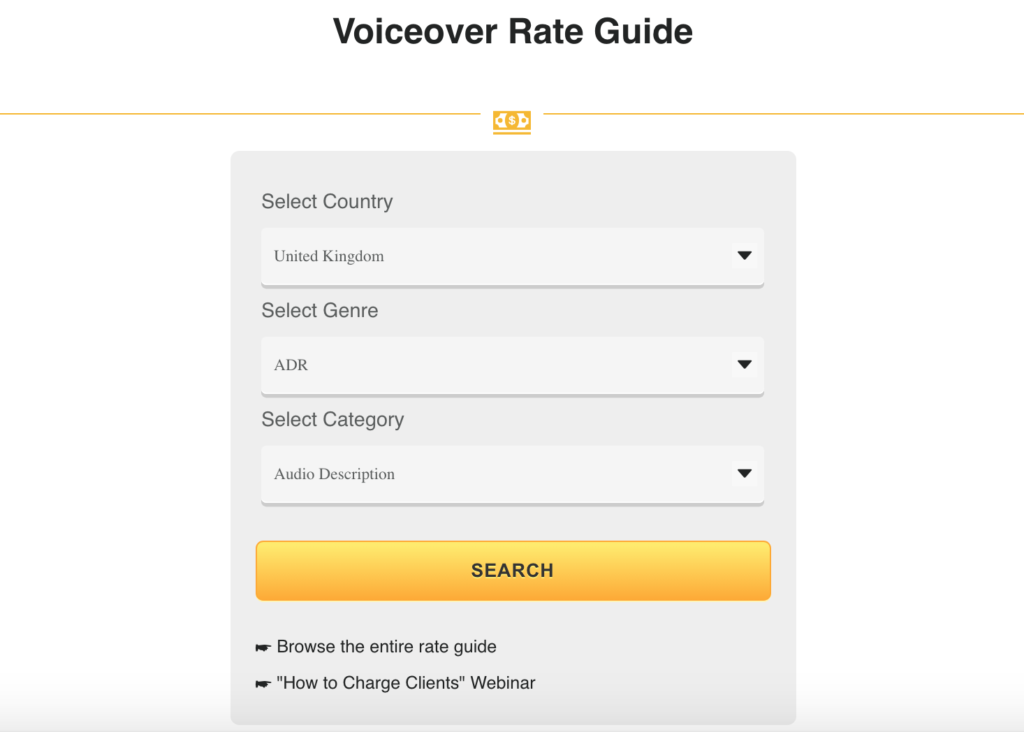 Then, up until this point, the guide wasn’t really mobile friendly…

Solution: We’ve made the rate guide different for mobile, using the same database, and you can now access all the rates you need on mobile devices, in real time.

Therefore…. we need to know what the local rates are on a per-country basis.

As you might know, with the launch of the Gravy For The Brain V5 application, GFTB is committed to moving into 30 global territories within the next 3 years. Each local territory site (e.g., Canada, France, Spain, Australia/New Zealand, USA, Egypt and so on) is fully localised into that territory’s language and has specific and custom content built for that locale.

Well we have solved quite a few issues already, but the astute among you will have noticed that up until this point, we haven’t tackled the elephant in the room – the P2P sites. Yes the all singing, all dancing GFTB Rate Guide V2 is great for those people who want to look at it and get advice on rates….but what about the smaller companies around the world who don’t really know much about the voiceover industry and just use the P2P’s to get voice for their local projects? What about those who don’t even know that there is such a thing as a rate guide?

Well, we’ve solved that issue too.

The final piece of the jigsaw that makes up the global voiceover rate guide V2 is….the ‘Rates API’.

What’s an API I hear you ask? An API is a software protocol that allows one system to interrogate a remote system and, in this case, transfer data, live and in real-time.

The Rates API allows real-time access to individual rates within our rates database, and is specifically designed to be integrated into the P2P sites. The practical implication of this is that the P2P sites can now display live voiceover rates information to their hiring clients, and their voice talent.

How do we see this working? Well it’s up to each individual P2P site to implement as they see fit, but here is our suggestion:

i) The Rates API – Educating the Hiring Clients:

At the point of creating a job on the P2P site, the hirer describes what kind of job (country, category, genre) it is, and immediately, through the Rates API, are shown the average price ranges for this type of job. The hirer doesn’t necessarily have to abide by these guides, but they are educated nonetheless.

5. How Much Does The Voiceover Rate Guide V2 and the Rates API cost?

So here’s the best thing of all – it’s completely locked down, secure, ultra-fast (it actually sits on it’s own unique server dedicated to doing nothing but display rates)…..and how much will we be charging for this service?

Nothing. It’s completely free of charge.

The rate guide V2 and the Rates API are completely free because we believe that this is the most important problem to solve of our time.

It’s in everyone’s interest to have a centralised reference point for averages of rates generally charged by people in the voice industry today.

6. Ok, but are the P2P Sites Actually Going to Use the Rates API?

It’s a good question – and here’s some more good news for you. At the time of going to press with this article we have agreement from 4 of the major global P2P sites to use the Rates API in their system.

It’s important to understand that this actually benefits the P2P sites themselves for a few reasons. Not only do they not have to maintain their own rate system, and not only can they implement this in whatever manner they chose specific to their platform, but the P2P sites now get to disassociate themselves with responsibility for voiceover rates.

The P2P sites are always being criticised as being the gatekeepers for quality, and low-balling rates within their platforms, but now with the inclusion of the Rates API, can benefit from the good PR associated with finally educating both their hiring clients and their newer voice artists.

7. Our Vision for the Future

It’s fair to say that the voiceover industry is undergoing a huge state of change. Although I do always argue that the only constant is change, the industry is changing more now and at a faster rate than at any time in it’s history.

If we don’t act now to stabilise the voiceover rates downward spiral, there is a good chance that there may not be a voiceover industry as we know it in the future. I am, perhaps being a little overly-dramatic in saying that, but voiceover rates are the hot topic in our industry. An industry with half the average pricing we have now for example, is unlikely to be sustainable, especially when we think of the old quality triangle – Price, vs, Quality, vs Time. Something will have to give at some point if we don’t act to save the industry, as an industry.

We are in a privileged position at GFTB to be able to do something about it, and the Global Rate Guide V2, coupled with the Rates API is our answer to the problem.

The four P2P sites (we will release their names soon!) that have so far agreed to implement the Rates API are forward-thinking, motivated in the same way we are and do want to help the industry – after all, it’s in their benefit as well. I would encourage you to publicly applaud those sites who integrate the Rates API into their platforms…..and put public pressure on those who do not, to integrate it.

As we say at the start of the One Voice Awards…..alone we are many voices, but together, we are one voice.

[Written at the VO Euro Retreat, Barcelona, May 2019, by Hugh Edwards]